Aurora Cannabis: Too Late To The CBD Game

Aurora Cannabis (OTC:ACB) announced a small deal to acquire a CBD company in the U.S. for $40 million in shares. We think the deal is too small to make a meaningful difference to the company. The timing of the deal is also questionable. The U.S. CBD industry is facing an oversupply due to low barriers of entry and ample supply of cheap hemp raw materials. Entering a crowded and challenging market at this time raised more questions regarding Aurora’s strategy and ability to fund a new market while it tries to pull off a turnaround in its core operation in Canada.

(All amounts in USD)

After the market closed on Wednesday, Aurora announced that it will acquire Reliva which is a U.S. CBD company. The deal is priced at $40 million in shares at closing and an earn-out of up to $45 million over two years. Aurora shares shot up over 30% on the news which seems excessive given the limited impact this deal will have on the company as discussed below.

The U.S. CBD market has existed for years and has been disrupted since 2018 after the 2018 Farm Bill passed to legalize industrial hemp cultivation. Most investors expect the CBD market to experience substantial growth for the years to come. However, there is a catch that has impacted industry incumbents. Since the 2018 Farm Bill was passed, a large number of vendors entered the CBD market helped by the low barriers to entry and booming consumer demand for CBD-infused products. Cheap hemp crops are also readily available from farmers around the country. Since then, we have seen CBD companies facing eroding market share and deteriorating financial performance despite the overall market growth. 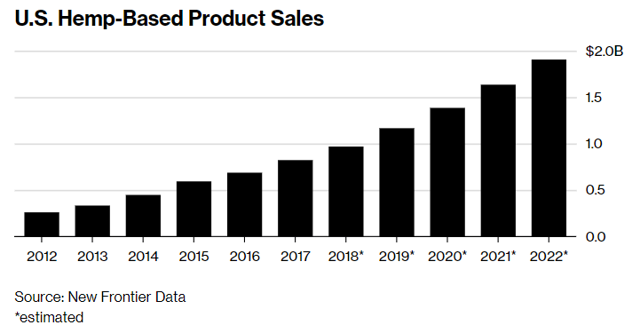 The leading public company in CBD is Charlotte’s Web (OTCQX:CWBHF) and its recent underperformance serves as a good proxy for the overall industry challenges. Since Q4 2018, sales have not grown at CWEB and gross profit stayed flat all while the entire CBD market experienced substantial growth. After the legalization, national F/D/M partners entered the arena and CWEB enjoyed substantial growth from these channel partners. However, the rising competition suffocated its traditional retail outlets including many health and wellness stores and independent retailers. Despite investing heavily in infrastructure and sales and marketing, CWEB has faced major headwinds in trying to grow its business in the crowded CBD market.

Based on the company website, Reliva offers CBD-infused products in the form of consumables, topicals, and pet products. The product line is similar to CWEB and the company claims that Reliva products are sold in over 20,000 retail stores which seems quite a large number if true. Compared to CWEB, its product line is less robust and product information is less detailed on the website. Aurora claims that Reliva had a positive EBITDA in the last 12 months which by definition will be accretive to Aurora given its C$51 million of EBITDA losses reported last quarter.

Aurora shares have bounced off recent lows after it reported fiscal 2020 Q3 results that showed stabilization in its financial performance. Aurora now has C$2 billion of market cap and trades at 8.5x EV/Sales (Q3 cannabis-only sales annualized) which is in-line with other top Canadian LPs. We think the shares will continue to be volatile given its popularity among retail investors and speculators. After the recent 12-to-1 share consolidation and a huge rally in the last two weeks, the stock remains 47% down in 2020.

As discussed above, we think the nature of this acquisition means that there will be a very limited impact on Aurora’s financial performance given the size of the deal and bleak growth prospects. While Aurora didn’t disclose the financial metrics, we think the deal is likely very small given that industry leader Charlotte’s Web currently trades at ~5x revenue. Reliva is likely to fetch a much lower multiple which means that its revenue is likely around $8 million or higher based on the $40 million base purchase price. With limited growth opportunities within the CBD industry, we see this transaction doing little to help Aurora’s growth profile. There will also be no synergies given Aurora essentially has no presence in the U.S.

The acquisition of Reliva is a very small deal thus its impact on Aurora will be limited. The all-stock deal also causes additional dilution to existing shareholders who have been diluted through various large acquisitions over the past three years. The decision to enter the U.S. CBD market is also debatable as the market is currently reeling from oversupply and low barriers to entry. Overall, this is a transaction that is not going to dramatically change the growth profile or financial performance of Aurora given the current market conditions which means that any excessive share price movement is likely an overreaction and could be reversed in the near-term. We remain cautious on the company given its tough task of pulling off a turnaround.

Disclosure: I/we have no positions in any stocks mentioned, and no plans to initiate any positions within the next 72 hours. I wrote this article myself, and it expresses my own opinions. I am not receiving compensation for it (other than from Seeking Alpha). I have no business relationship with any company whose stock is mentioned in this article.

Previous Can CBD Companies Secure Federal Trademark Protection? Next One of These Eye Creams Is Your Next Skincare Essential