Your barista may be at home, but that doesn’t mean your coffee game should suffer 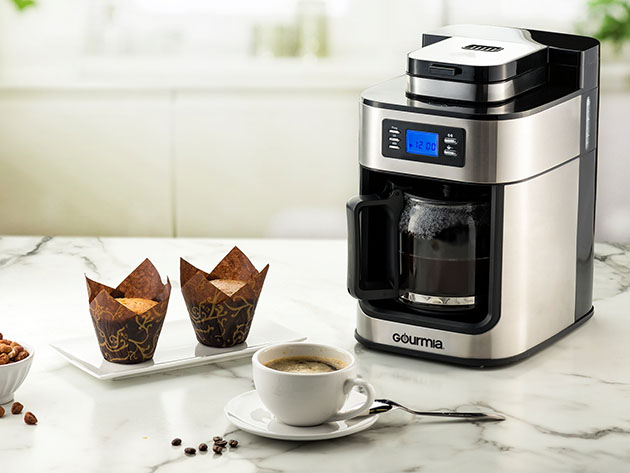 Gather round, young and old — and hear tales of bygone days. Back in olden times, citizens would mass at a house of coffee, wherein skilled java alchemists would concoct special blends and apply artisanal wizardry to make each steaming chalice an appointment for the taste buds.

Granted, said wizards, once known as baristas, were ungifted in the art of immaculate spelling —but their inspired, almost supernatural ways of the bean were legend.

People are sequestered in their homes now, but the myth of the fabled barista lives on. Assembled below, find assorted relics of the dark art of brewing, each dedicated to keeping the time-honored practice of drinkable beans alive for future generations. Spread the word of this epic saga and own such artifacts in your own home.

Headquartered in Brooklyn, New York, upstart small appliance maker Gourmia has spent the past few years establishing itself as a name player in the boutique coffee making field and now have an array of makers available for all shades of coffee-loving activity.

For the basic set-it-and-forget-it crowd, the Gourmia GCM2865 12-Cup Programmable Coffee Maker ($49.99; originally $59.99) is equipped with a programmable timer to have up to 12 cups of steaming hot coffee ready the minute you get up each morning. And the Gourmia GCM3600 Single Serve Coffee and Tea Maker ($59.99; originally $119.99) easily brews either coffee or tea at the push of a button as well as serving up single-serve k cups as well.

If your tastes run toward the more pure, 12-hour slow soak of cold brew coffee, the Gourmia GCM6850 Digital Accelerated Cold Brew Coffee Maker ($59.99; originally $109.99) simulates that process in as little as 4 minutes, creating premium cold brew in four different brewing strengths. Meanwhile, the Gourmia GCM7800 Brewdini 5-Cup Cold Brew Coffee Maker ($149.99) refines the process down to only 2 minutes with a patented vacuum technology that suctions sugar, caffeine, and other elements out to preserve the bean’s delicate natural flavors.

While drip method coffee making gets the job done, many aficionados will tell you the pour-over produces a more flavorful cup every time. The Gourmia GCM3250 Dual Mode Pourfect Pour-Over Coffee Maker ($59.99) lets you choose either automatic or manual modes to control the precise amount of grinds and water needed for the pour-over you like best. And the Gourmia GCM3350 Pourista Fully Automatic Pour-Over Coffee Brewer ($129.99; originally $149.99) allows you to maintain precise water temperature throughout the pour process for optimal flavor and even replicate the action of a trained barista with its planetary pour pattern and authentic bloom pause to hit the flavor you want just right.

And since some lovers just don’t feel it’s right unless they grind the beans themselves, the Gourmia GCM4700 Coffee Maker with Built-In Grinder ($99.99; originally $139.99) combines a state of the art coffee grinder and brewer to deliver the freshest coffee possible.

Since Gourmia is far from the only player in the coffee game these days, FrankOne Cold Brew and Coffee Maker ($79; originally $99) offers their VacTec brewing process, which accelerates the extraction time to serve up an intense cold brew in four minutes, or a piping hot cup of the regular stuff in just 30 seconds.

Whether you go with beans or grounds, the Chefman 4-Cup Grind & Brew Coffee Maker ($75.99; originally $99.99) lets you quickly use its integrated grinder to create the freshest ingredients, preserving the bean’s oils and flavors for maximum taste.

The BeanPlus Cold Drip Brewer Premium Kit ($99.99; originally $130) is a smarter way to cold brew, with its own special drip method that shaves brewing time down to just four hours and a patented slow-drip valve for adjusting your coffee strength to your taste.

Behmor is making a pair of their factory refurbished premium brewers available at a fraction of their regular cost, including the 1.2L Connected Coffee Brewer ($79.99; originally $169.99), which lets you use the Behmor app to adjust your brew settings and create your own memory presets to achieve the perfectly personalized cup of coffee all from your phone.

Or you can save $300 on the supremely loaded Behmor Brazen Plus 2.0 Temperature Control Coffee Brewer ($99.99; originally $399.99). In addition to the personalized settings, this feature-heavy unit allow you to set your brew temperatures based on your elevation and use the pre-soak option so your coffee blooms before brewing for an even better flavor.

Finally, the Ratio Six Coffee Maker ($345) combines form and function for a brewer with a slimmer profile, lighter weight and brilliant simulated barista pour over process to measure your water flow with precision throughout the brew. And for the heights of simplicity, it all works with the push of a single button.

To maintain freshness even long after the grind, the Turn-N-Seal Food Vacuum Container with 2-in-1 Brew Scoop ($24.99; originally $40.98) creates a strong vacuum inside, locking out air and moisture while retaining all of your beans natural properties.

You can get an expert brew anywhere in a pinch with the Palmpress Coffee Press ($42). This one-cup stainless steel filtering system lets you include your grounds, then control your own coffee-to-water ratio that never touches plastic or rubber for the best possible brew.

Some brew units have their own grinders, but for a true variety, you can’t beat the Gourmia GCG205 14-Oz Automatic 4-Mode Digital Conical Burr Grinder ($99.99). From French pass to espresso to just a primo cup of joe, this grinder has 39 different grind size options with its own built-in scale to measure precise amounts for the perfect cup.

Of course, the quality of a brewing system doesn’t matter much without quality beans and grounds to put inside. For Nespresso Original machine users, the Gourmesso Nite Edition Bundle of 90 High-Intensity Blends ($37.99; originally $42.21) brings an assortment of espresso capsule tastes, each graded by their intensity, so you can always match the perfect blend to your mood.

If you’d like to combine the effects of a responsibly sourced fresh brew with the restorative, non-psycho-active properties of CBD, Jane West CBD Coffee ($38.99; originally $48) delivers the best of both worlds. Farmed by female coffee growers in Costa Rica, the rich light-roasted beans are coupled with CBD to help relieve pain, reduce anxiety, alleviate cancer-related symptoms and more. Or you can try Buddha Beans CBD-Infused Whole Coffee Beans ($26.99; originally $33) which combines non-GMO CBD with Mexican beans with hints of chocolate, hazelnut and citrus for a truly unique taste.

But if you’re still a big fan of your Keurig, the Glorybrew 72 Compostable K-Cup Coffee Pod Bundle ($42.99; originally $50) offers a full selection of Glorybrew’s premium beans and flavors, all in pods that are 100 percent compostable and made from bio-based materials to ensure you’re not only drinking well, but remaining conscious of the environment.

Hackers tried to break into WHO, which faces more than two-fold increase in cyberattacks

Hackers tried to break into the World Health Organization earlier in March, as the COVID-19 pandemic spread, Reuters reports. Security experts blame an advanced cyber-espionage hacker group known as DarkHotel. A senior agency official says the WHO has been facing a more than two-fold increase in cyberattacks since the coronavirus pandemic began.

The death toll in Italy’s coronavirus outbreak today passed 1,000. Schools throughout Italy are completely shut down, which is reportedly driving a surge in internet traffic as bored kids forced to stay indoors turn to online games.

The last few weeks have given us all a lot to think about. As we watched stores close, Costco lines snake through parking lots and items like hand sanitizer and toilet paper disappear everywhere like they were Lady Gaga tickets, there’s one significant takeaway it’s safe to say we all can agree on. We should […]

Learn to play the piano, but not in that horrible after-school way you’re thinking

Whether it was Bach or Chopin, Ray Charles or Jerry Lee Lewis, Stevie Wonder, Elton John,  Alicia Keys or Norah Jones, there was someone whose mastery on the piano made you think, wow, I wish I knew how to do that. It’s a singular, almost timeless skill — and if you love music, there’s no […]

These weighted blankets will help soothe those frayed nerves

With everything happening now, even the most jaded among us are bound to feel some pangs of anxiety now and again. It’s a crazy time. When we crawl into bed each night, it’s common for our brains to go into overdrive and start thinking — and worrying — about what’s going on and what’s to […]

Previous NewLeaf Brands Launches COVID-19 Relief Initiative for Laid-off Workers, and Sale of up to 50% Off on All Online Purchases at WeAreKured.com Next The Best CBD For Anxiety